If you’re tired of eating the same dinners every night, it’s never been easier to switch things up a bit. You don’t need to be a cordon bleu chef or spend hours slaving in the kitchen to produce mouth-watering dinners that everyone will love.

Below you’ll find 10 delicious dishes which should give you the inspiration to completely overhaul your menu and try something new! 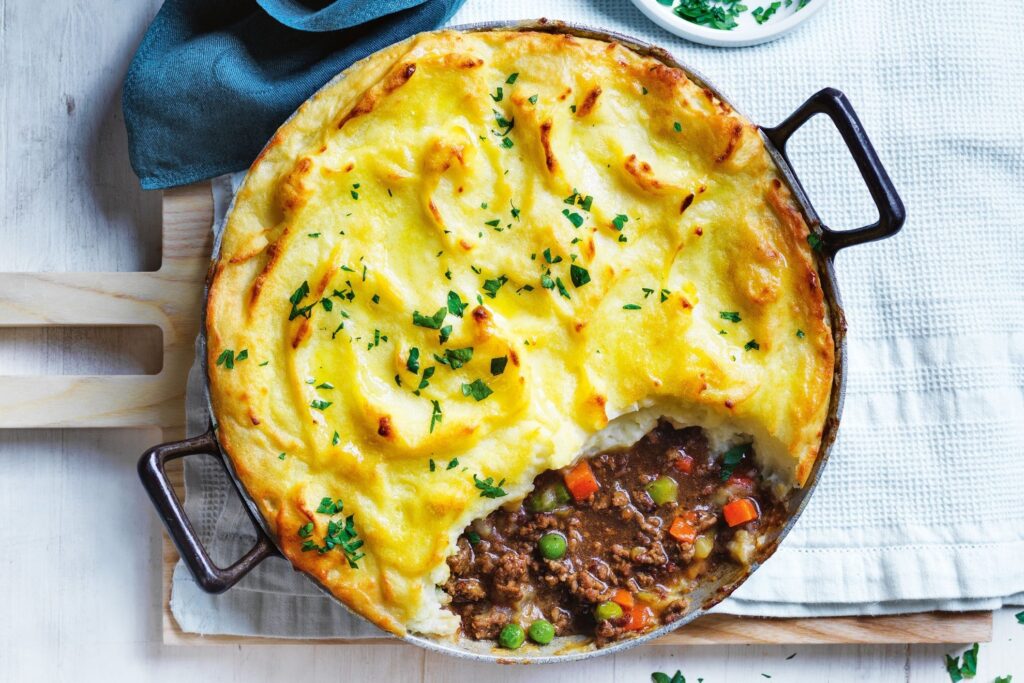 If you enjoy home-cooked meals, you probably already have your own killer recipe for shepherd’s pie. There’s no need to reinvent the wheel here and learn a whole new recipe, but you could tweak it a little.

This version of shepherd’s pie doesn’t use the classic topping soft mashed potato, replacing it with crunchy and cheesy Hasselback potatoes instead.

To make, finely slice potatoes and cover your mince filling with dense rows of potato slices which have been thoroughly seasoned. Brush with butter and cook in the oven for 55 minutes before adding cheese and baking for a further 10-15 minutes.

The Japanese equivalent of fried chicken in curry form, katsu chicken curry is very different to a standard Asian curry.

This katsu curry recipe is astonishingly easy to make and delivers beautifully crisp chicken in breadcrumbs together with an aromatic curry sauce, and served with rice. The flavor of the katsu sauce is the secret to this dish and is made with onion, garlic, ginger, turmeric, curry powder, soy sauce, and coconut milk. You’ll also need some flour, stock, and a sprinkling of sugar.

Wholesome, deeply satisfying, and packed full of flavor, be prepared for katsu chicken to be your new favorite dish. If you’re more accustomed to eating cod that’s covered in batter, this dish will provide a delicious alternative. Paired with chorizo, chunks of cod are baked in the oven with a whole host of supplementary ingredients including potatoes, tomatoes, olives, artichokes, garlic, and herbs.

Each chunk of cod is covered with a herby crumb before being cooked in the oven to absorb the flavors of the chorizo and other ingredients.

Taking only 20 minutes to cook and served with a green salad, this fish dish is certain to inspire more seafood recipes.

Whether you serve up a dainty dish as a starter or enjoy a hearty bowl for a warming winter dinner, everyone should have a good recipe for leek and potato soup in their repertoire.

Taking less than an hour to cook from scratch, this soup uses leeks, potatoes, cream, spinach, milk, vegetable stock, butter, thyme and a pinch of salt and pepper. It’s not a long list of ingredients, and there’s no longwinded preparation.

Finish by blitzing in a food processor if you want a creamy soup or leave chunky for a more filling bowl. Add the spinach and a swirl of cream and you’re all set to enjoy with some crusty bread. 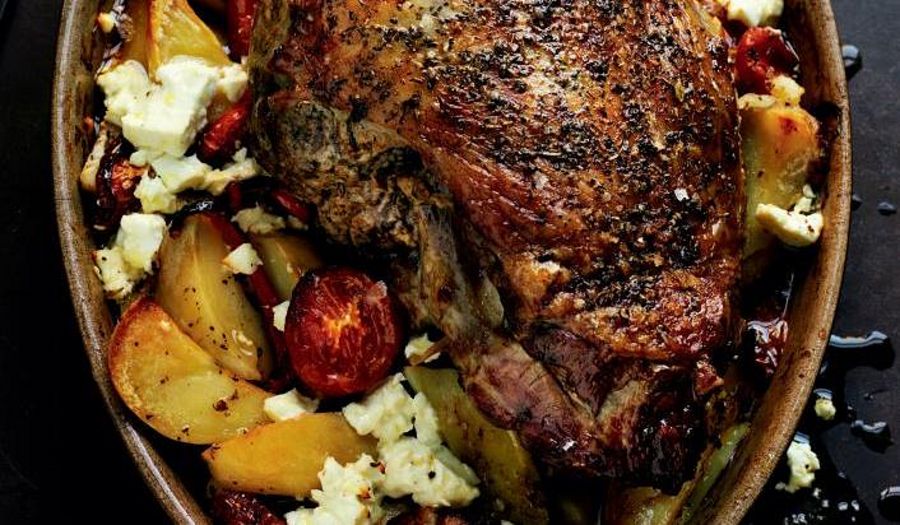 This traditional Greek recipe is simmered slowly in the oven to produce lamb that falls apart in the mouth.

Cubed lamb is covered with a marinade made from oregano, cinnamon, garlic, wine and olive oil and left overnight, or for a minimum of two hours. The lamb is then placed onto parchment with potatoes, peppers, onions and chopped tomatoes. The parchment is brought together and tied to make parcels before being baked for just under three hours.

Serve with feta, mint yoghurt, and Greek salad for a Mediterranean feast.

This is a one-pot dish but it’s not a typical casserole. Instead, salmon fillets nestle alongside veggies such as broccoli, shiitake mushrooms, aubergine, sweet potato, and pak choi.

The cooking method is simple as everything is cooked in a traybake in the oven. A teriyaki sauce is made from honey, soy sauce, rice vinegar, sesame oil, ginger, garlic, and mirin which is drizzled over the ingredients 10 minutes before the end of cooking. 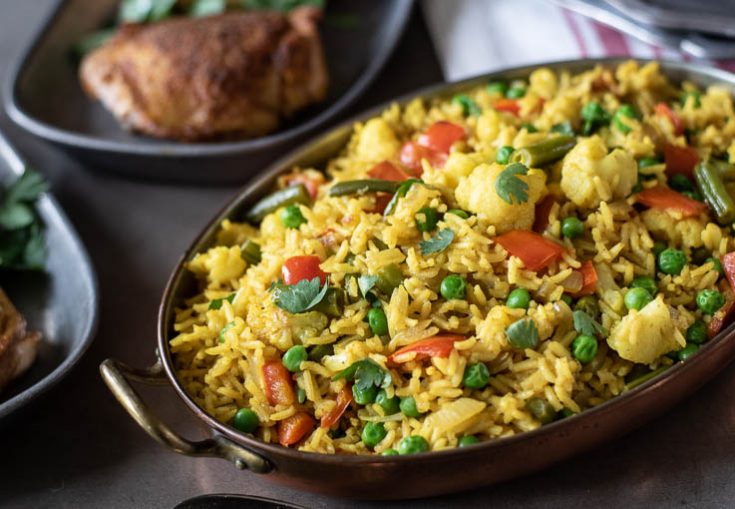 Not every dish has to be piled high with meat to make a filling main course. This curried rice is tasty enough to be served on its own but also works well as a side.

The great thing about this dish is that you can play around with the spice levels, flavors, and vegetables to find a combination that works for your palate. Starting off with ghee and curry leaves, the rice is toasted before being simmered in stock for around 20 minutes.

Choose your own flavor profile but garlic, ginger, coriander, cumin, curry powder, cayenne and onion work well together. Serve with natural yoghurt and some chilies if you like things on theft side!

If you’re on a keto diet, there’s no need to miss out on the recipes you really love as this keto beef and broccoli dish shows. From your fridge to plate in less than an hour, it’s simple to prep and cook while offering hearty eating for all the family.

Using flank steak, or flat iron steak as a substitute, the meat is quickly frozen for 15 minutes before being sliced thinly and seared. Remove the beef and in the same pan soy sauce, ginger, garlic, and apple cider are simmered with broccoli for five minutes.

Add the beef back in and allow the sticky sauce to coat it, heating through until it’s all cooked to your taste. Serve on its own, with cauliflower rice or potatoes – you don’t need to be on keto to enjoy this. 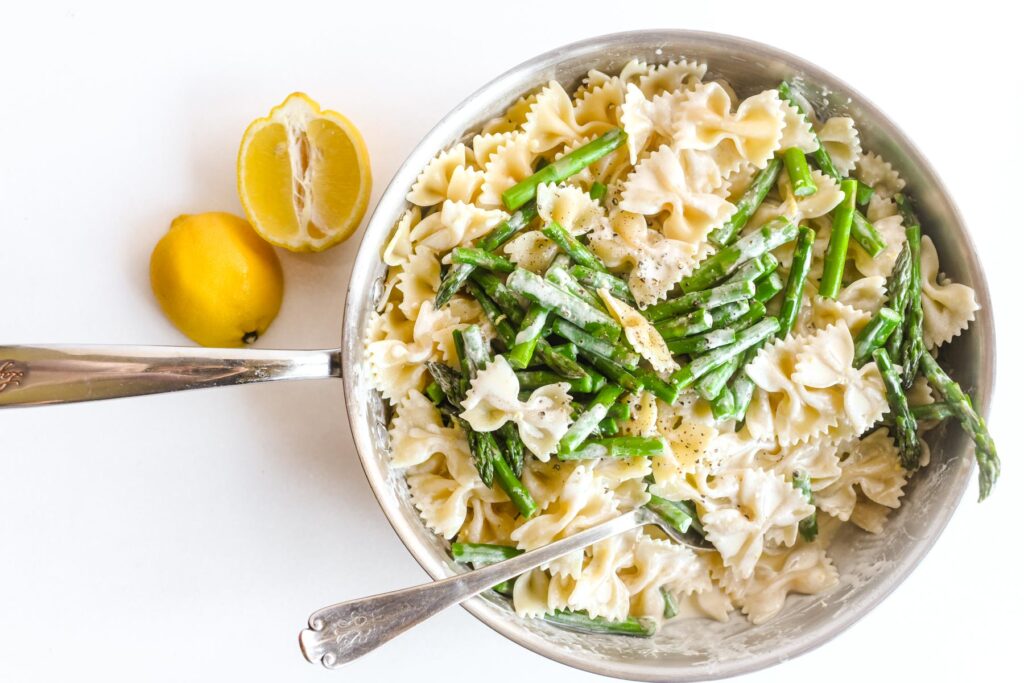 This is a recipe that’s best reserved for when asparagus is in season which is March to June. If you really want to enjoy it at its peak, April is the month to dish this one up.

The beauty of this dish is its simplicity. You’ll just need pasta (such as penne), a recipe for white wine sauce, asparagus, and some lemons. Add the citrus five minutes before the end and serve with some chili flakes for a touch of heat.

Sophistication on a plate.

Although you might be more accustomed to making chili with beef, the truth is that it’s packed full of so many flavors you won’t even notice if you switch to a vegetarian recipe.

Onions, bell peppers, carrots, beans (pinto, black and kidney), chopped tomatoes, garlic, and vegetable stock make up the body of this warming chili. Depth is added to the flavor with this addition of chili powder, oregano, and cumin, plus a dash of salt and pepper.

Serve with coriander, sour cream, and cheese for a vegetarian dish that you’ll love.